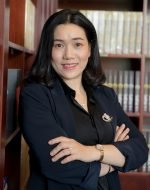 Attorney Thu was a Partner of Phuoc & Partners LLP from September 2010 to Present. Prior to that, Thu worked for the Branch of Gide Loyrette Nouel Law Firm in Ho Chi Minh City from January 2009 to September 2010. Thu was a Senior Lawyer of Vision & Associates Legal from May 2003 to September 2008. Thu used to be Legal Counsel for H&M Consulting Co. Ltd from May 2001 to April 2003. Thu also worked as Legal Director for Diageo Vietnam for a period of 06 consecutive months to provide consulting services and internal legal issues in daily business activities of such enterprise.

Attorney Thu has many presentations at legal professional refresher courses as organized by the Vietnam Bar Federation and the Ministry of Justice; Attorney Thu is also a speaker at many workshops on labour law of Vietnam Human Resource Club – VNHR.