Will the Global Tax Agreement Back Vietnam to Squeeze more Tax out of "Big Guys"? 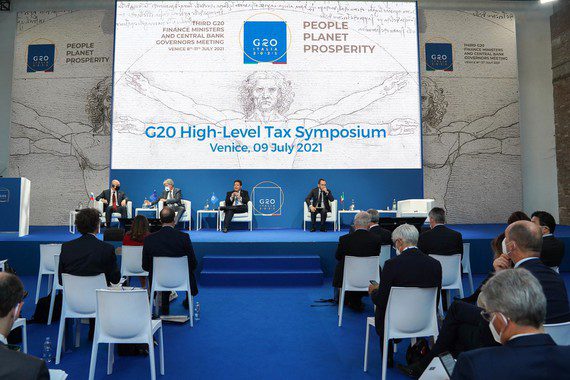 What is in the Global Tax Agreement?

The Global Tax Agreement consists of two main pillars. Accordingly, the Pillar One ensures that MNCs pay corporate income tax (“CIT”) in the country where they generate revenue, rather than localities where they are headquartered to impose taxes. Under the Pillar One, the countries where companies generate revenue will be empowered to levy a new CIT on at least 20% of profit exceeding a 10% margin for the largest and most profitable MNCs (these reallocation rates of 20% and 10% will be finalised soon)[1].

Meanwhile, Pillar Two allows countries to apply a minimum global CIT rate of at least 15%. This measure will have a larger overall impact on the taxes collected by the governments, but its effect on companies will vary widely. Specifically, the minimum tax rate may cause significant impacts on MNCs, whose majority of earnings are in tax-free jurisdictions. Conversely, its impact would be trivial as the Pillar One allures such MNCs to reallocate some of their income out of tax havens[2].

On 9 July 2021, the G20 Finance Ministers and Central Bank Governors Meeting has taken place in Italy[3]. Accordingly, 131 countries agreed in principle to tax the profits of MNCs and set a global minimum corporate income tax rate of at least 15% for the Pillar Two of the Global Tax Agreement. However, to reach a broad consensus of countries and territories, the Global Tax Agreement needs a relatively long time, especially in tax havens such as Bermuda, the British Virgin Islands (BVI) and the Cayman Islands.

For Vietnam, the new global tax regulations may be hard to bring about good changes as the tax sharing mechanism for market countries also requires a competent tax administration system and coordinated efforts at the international level. These are also the concerns raised at the Joint Forum on Implementation of Measures to Counter Base Erosion and Profit Shifting (BEPS) of the Organisation for Economic Co-operation and Development (OECD) when discussing the blueprint for Pillar One because this is a major challenge for developing countries with weak tax administrative capacity.

Circular 103/2014/TT-BTC of the Ministry of Finance stipulates that foreign organisations and individuals doing business in Vietnam or earning income in Vietnam, with or without a permanent establishment in Vietnam, are subject to foreign contractor withholding tax (FCWT) unless they supply goods for delivery at the foreign border checkpoint[4] or earn income from services provided and used outside Vietnam[5].

For acts of non-fulfilment of tax obligations , the Ministry of Finance has issued sanctionative regulations, which are: Commercial banks and intermediary payment service providers are responsible for collecting, paying taxes, withholding, paying tax on behalf of such taxpayers, if it is infeasible to withhold or pay on behalf of taxpayers, they shall be required to keep records of payments remitted to the overseas suppliers and provide this data to the General Department of Taxation on a monthly basis, as well as block such account[7]… at the request of tax authorities[8] to control their cash flow and ensure the compliance as tax liabilities arise as prescribed.

Up to now, Vietnam has signed more than 80 DTAs with many countries and territories[9] to attract foreign investment for economic development. The purpose of the DTAs is to determine a countries’ right to tax income of foreign individuals or enterprises arising on its territories, as well as to ensure such income shall not be subject to double taxation by the concerned countries. According to most of the DTAs that Vietnam has involved, the CIT will be exempted in Vietnam if the foreign contractor does not have a permanent establishment in Vietnam. Under DTAs, a permanent establishment is essentially the same definition: “a fixed place of business through which the business of the enterprise is wholly or partly carried on“[10].

In addition, the Law on Cybersecurity, which took effect from 01 January 2019, requires foreign enterprises earning income from online services in Vietnam to store data and establish a commercial presence in Vietnam[11]. Since then, state agencies shall be eligible to keep records of cash flows in and out and determine the basis for requesting foreign investors to fulfil their tax obligations. However, up to now, giants owning platforms such as Facebook, Tiktok, Google, Netflix, Amazon, etc., have not yet established a permanent base in Vietnam. So far, they have just appointed agents to provide advertising services on these platforms.

Concerning other countries’ experiences, many countries have their legal documents stipulating that foreign enterprises must follow the dictates of such countries. For example, the EU took drastic measures against the big tech giants by requesting them to set up a centre to deal with bad news; Russia requested Facebook to locate its servers in Russia or else it would be resort to suspension. In Asia, in addition to Google, Facebook, WhatsApp, other companies such as Telegram and LinkedIn – have proved their significant presence in India.

In light of the above analysis, it can be seen that countries should regulate specific provisions to ensure the compliance of MNCs with the “rules of the game” of the country where they invest. To MNCs, it is obliged to adapt themselves to the local with appropriate investment strategies ensuring transparency on taxes, compliance with the laws of the host country to bring about long-term, sustainable and fair revenue for the parties.

How will the Global Tax Agreement affect Vietnam?

The Global Tax Agreement will trigger a reallocation of investment resources. Consequently, it is prone to affect Vietnam in the following directions:

So what is Vietnam supposed to do?

Nowadays, with the power of its signed DTAs, Vietnam has sufficient ground to require investors and technology companies to locate their headquarters in Vietnam under the Law on Cybersecurity as a basis of taxation under the DTAs.

However, with the global tax trend, focusing only on the place where MNCs generate profits, rather than where their head office is located, updating and improving the legal system as well as reviewing bilateral and mutual signed agreements to catch up with international tax trends is pivotal and in need of a proper roadmap.

To do that, Vietnam first needs to improve the legal system on tax administration by reviewing domestic regulations and building a roadmap for amending legal regulations associated with referenceto international tax trends, i.e. the global tax agreement to ensure synchronous coordination in its implementation. Specifically:

Besides, regardless of Vietnam law orientation on tax registration, declaration, payment and sanctions to handle non-compliance cases, there are still many difficulties in tax collection. Therefore, it is necessary to put legal provisions into practice by (i) building a complete, transparent, and up-to-date taxpayer database system; (ii) improving professional qualifications of tax administrators; (iii) focusing on enhancing the exchange and provision of information between tax authorities from different countries to search for data and information to prevent tax evasion and transfer pricing by MNCs; and (iv) promoting the application of information technology by initially building and deploying application software for electronic invoice management. Finally, to strengthen international cooperation, especially the exchange of information and experiences, to take advantage of the support of international partners to improve domestic capacity to meet the requirements of integration, especially in the tax field.

Over the years, Vietnam has also changed its tax policy to adapt to globalisation and challenges from the digital economy development. Erosion of the tax base and transfer of profits is a huge challenge for governments, especially developing countries such as Vietnam. Therefore, it is imperative to build an explicit and specific roadmap satisfying prevalent standards to protect the tax base and revenue sources for the treasury budget, simultaneously, to strengthen international cooperation to implement solutions to prevent tax base erosion and profit transfer.

[10] Artcle 5(1), the Agreement for the Avoidance of Double Taxation and the Prevention of Fiscal Evasion with respect to Taxes on Income between Vietnam and Singapore

[17] Asian Development Bank Institute 2018, Edited by Satoru Araki and Shinichi Nakabayashi, Tax and Development: Challenges in Asia and the Pacific